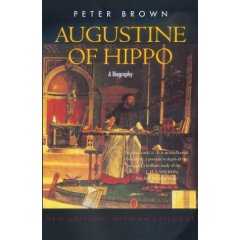 No person contributed more to the development of Western Christianity than Augustine of Hippo, born November 13, 354. On this anniversary of his birth, why not read John Piper’s excellent biographical sketch?

If you would like to read some of Augustine’s works, begin with his Confessions, perhaps the world’s most influential theological and spiritual autobiography.

My favorite biography is Augustine of Hippo by Peter Brown. Last year, I reread this splendid book to prepare for my book club’s discussion of The City of God. I also read with profit Henry Chadwick’s Augustine of Hippo: A Life, a much briefer biography than Brown’s and an excellent introduction to his life and work.

“Two cities have been formed by two loves: the earth by the love of self, even to the contempt of God; the heavenly by the love of God, even to the contempt of self. The former, in a word, glories in itself, the latter in the Lord . . . The one [city] delights in its own strength, represented in the persons of its rulers; the other says to its God, ‘I will love Thee, O Lord, my strength.’”

“Give me the grace [O Lord] to do as you command, and command me to do what you will!”

“Faith is mighty, but without love it profits nothing. The devils confessed Christ, but lacking charity it availed nothing. They said, ‘What have we to do with you?’ They confessed a sort of faith, but without love. Hence they were devils. Do not boast of that faith that puts you on the same level with devils.”